K is for Kittle 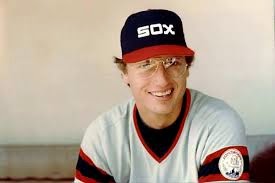 At a time  when Larry Bird,  John Mellencamp and David Letterman  were the most famous folks around from Indiana, No Hoosier was more popular than Kittle.  At least, not on the south side of Chicago.  Kittle averaged 34 homers per a  162 game season.   Kittles season rookie mark of 35 homeruns in 1983 (eclipsed by Abreu last year) was his most ever for the pale hose.He followed that up with 32 in’84.

Kittle started and finished his major league career with the White Sox and is still a fan favorite.  I ran into him (almost literally) at Sox Fest in 2006 and he signed the cap off my head.

One thought on “K is for Kittle”